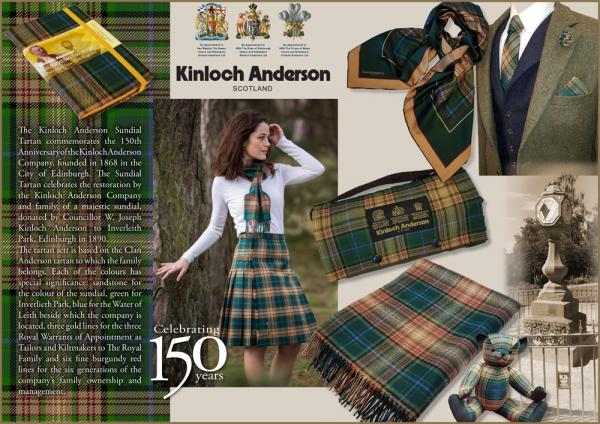 Kinloch Anderson has marked its 150th Anniversary with the refurbishment of an iconic sundial in Edinburgh and the design of a very special tartan.
The Company marked its 150th anniversary on Saturday 16 June 2018 with the unveiling of the refurbished version of a sundial it gifted to the city of Edinburgh in 1890. The Kinloch Anderson Sundial was donated by Councillor W. Joseph Kinloch Anderson, a second-generation leader of the firm, and has been the centrepiece of Inverleith Park’s Sundial Garden since it opened in 1891.
The company was behind the refurbishment after being approached by Friends of Inverleith Park, and felt it would be an excellent way to celebrate its anniversary this year.  The project included adding surrounding cobblestones, and information boards giving details about the history and heritage of the item. “We’re very proud and pleased with what we’re doing,” said senior director Deirdre Kinloch Anderson. “I would like this to be a historic monument. I would like it to be a credit to Kinloch Anderson and a credit to the city of Edinburgh and I would hope that it will be admired and appreciated by as many people as possible. It’s going to look fantastic,”
To clebrate the Anniversary and the refurbishment of the Sundial it was only fitting for Kinloch Anderson to then design a special sundial tartan to mark the occasion.  Based on the Anderson Clan tartan in a nod to the company’s founder William Anderson, and including three gold lines to represent each of its Royal Warrants as tailors and kiltmakers to The Queen, The Duke of Edinburgh and The Prince of Wales.
The tartan was used to cover the sundial before its unveiling and now decorates a range of products including ties and notebooks. The festivities were marked by a celebration attended by the family, friends and business colleagues, and former Queen’s piper Derek Potter welcomed guests and escort ed the Lord Provost of Edinburgh.
Lord Provost Councillor Frank Ross said: “I am delighted to see the historic sundial restored as a striking focal point in this garden. Thank you to Kinloch Anderson for both gifting and, 127 years later, reviving this centrepiece, a fitting celebration of their 150th anniversary.”