Further Adventures of the First Piper in Portugal 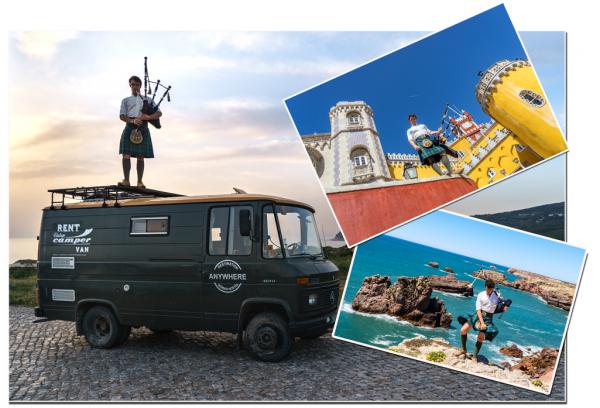 The history of Highland Dress in Portugal isn’t a particularly well-known one. Kilts are most often associated with Scotland, but there are a few sources to suggest the Iberian Peninsula as an origin for both tartan and kilts. Stone monuments of kilt-clad Galician kings dating back to 400BC have been found in Southern Galicia, modern day Portugal;  however, you don’t find too many kilts in Portugal nowadays, so I’ll say no more! When it comes to bagpipes; however, the story is a little different. Portugal’s connection with bagpipes, or rather the ‘Gaita-de-fole,’ goes back as long as Scotland’s does and traditional pipes are still played in much of Northern Portugal.

My first trip to Portugal was just over three years ago, right at the beginning of my kilted adventure. I had just returned to the UK from Tunisia, excited at the prospect of kicking off my bagpipe world record and I was eager to hop on another flight. Limited by my rather meagre bank balance, I opted for a three week long overland adventure around Western Europe. Starting in Paris, I meandered my way down to Italy and then back across to Portugal, but by the time I’d arrived on Europe’s Western coast, I had little time left to explore the country. Four days days later, having piped my way round Lisbon’s various colourfully tiled public squares, bumping into the odd holidaying Scot, I boarded my flight back to the UK vowing that I’d return once more to find the elusive Portuguese Kilt and pipe with a local piper! Last month, prompted by an invitation from a Glaswegian Head Mistress based in the Algarve, I found myself once again back in Portugal, but this time behind the wheel of a 1982 Mercedes Camper-van…

Travelling with the aim to pipe in every country means that I don’t often find myself returning to places I’ve visited; however, Portugal was a worthy exception. My first two days were spent re-exploring Lisbon, visiting a few spots I had previously missed, and I even found myself a new favourite piping location overlooking the Tagus River, right beside the ‘Padrao dos Descobrimentos.’ Enthralled by the bagpipe-kilt combo, I had plenty of cheers from passing Lisbon’ites and a rather amusing interaction with a group of Portuguese ladies that were dying to get their hands on some tartan and my “beautiful hairy bag,” indeed. The real adventure, however, began on a sunny afternoon in a parking lot by the Cais do Sodre ferry terminal, where we were to meet a man called ‘Flecha,’ aka ‘The Camper Van Man.’

“HEY MAN” he shouted in a surprisingly English accent, “…my name’s Flecha, and THIS is Bertha…” I stared at the rather monstrous Mercedes sitting before us, and a wave of anxiety hit me as I realised I would have to drive this beast for the next week. “She doesn’t happen to have power-steering does she?” I asked. “Nope! Driving her is kind of like steering a ship… it’s great!” Flecha replied. Superb, I thought to myself, this is going to be an interesting next hour trying to get out of Lisbon. After a quick spin around the parking lot, Flecha kindly reminded me that “…she has a top speed of 70 km/h and you HAVE to stop every 100km or she’ll overheat.” 7 hours later, having nearly caused a national incident on the ‘25th of April Bridge,’ I arrived under the veil of darkness in the Southern town of Aljezur, slightly miffed at the fact that it would have taken two and a half hours in a regular car.

To give a bit of background as to why I chose to return to Portugal, and how I got my hands on a camper van, as part of my travels I do talks and seminars at international schools about the bagpipes, tartan and, of course, my travels. One month prior to my trip I emailed the Aljezur International School and within minutes received a ‘YES PLEASE, COME!’ from Karen, the Glaswegian Head Mistress. Another aspect of my travels is photography and social media work, and I luckily convinced a well know travel company in Lisbon to lend me a camper-van for a week long trip. I wasn’t anticipating such a vintage number though!

Our first day in the Algarve was spent at Aljezur International School, a beautiful farmhouse-type school with it’s own vegetable gardens, cork trees, chicken coops, and river front access. “Ach it’s brilliant to have you here!” Karen said in her thick Glaswegian accent, “I’ve been forcing the students to learn the Gay Gordens for the past month, so I hope you can actually play!”

I kicked off the morning with a rendition of Highland Cathedral as the students walked up the drive. They all shuffled past with varying looks of bewilderment and excitement. As it turns out, they had no idea I was coming, and many of them had never been so close to a piper or even a man in a kilt. They were beyond excited! Across the day I was able to meet the various year groups as I carried out my talks and seminars, but I had repeatedly decline the offer to surf in my kilt! Aljezur has quite the surfing community, and most of the students spend their weekends in the water, so they were rather keen on the idea of kilted surfing.  As we approached lunch time, Karen rounded up the students and lined them up in garden, ready for a Portuguese rendition of the Gay Gordens. I counted them in and to my surprise what followed was quite an impressive spectacle. The star of the show was hands down the exceptionally nimble elderly Portuguese cook!

Aside from seminars with the students at Aljezur school, I made point of trying to find the most picturesque spots and bagpipe-worthy beaches. Every night I was able to pull up at a new location and enjoy the most spectacular views, and I then pipe away to my hearts content. However, I have to admit it’s quite hard to keep it all together when you're perched atop a cliff, piping away with the wind blowing your kilt about.

I never did manage to find that Portuguese kilt, and despite my initial intentions, I failed to meet up with any of Portugal’s famed pipers, but I suppose that just means I’ll have to go back!