The First Piper and his Kinloch Anderson Anderson Kilt! - An introduction.... 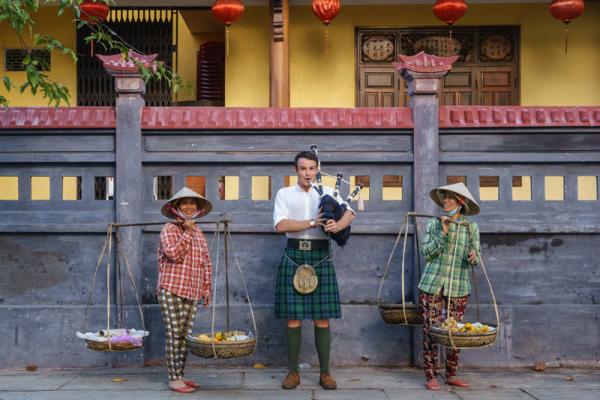 I’d been driving for about an hour when the weather turned. The wind started to throw up sand in spirals around the car and I was suddenly thrown into a world of darkness. I slowed the car down and switched on my lights; I could barely see 20 metres in front and having already experienced half a day of Tunisian driving, I wasn't going to take any chances. My destination was Mahdia, about a three hour drive from Tunis on the southern highway, and because I’d spent an hour getting lost in the labyrinth of roads that surround Tunis, I was already pretty grumpy.

Playing the bagpipes on the old walls of Mahdia as the sun set over the Mediterranean was the aim, but I was very aware of the fact that I might be arriving in the dark. I battled forward in my awkwardly shaped rental-car and struggled against the wind for another 30 minutes.

Eventually I made it into a small town and just as I decided to pull over for a break, the weather started to improve. I stepped out the car and assessed the sandy situation before me and decided I should probably soldier on.  So I hopped back in and revved away towards the highway. 100 metres outside the town I waved enthusiastically at a stationary police car and instantly regretted doing so. The police car light flashed on, and I was beckoned to the side of the road, miffed to have my journey disrupted once again, I begrudgingly stopped, rolled down my window and awaited the approaching policeman. Through an initial interaction involving hand gestures and my abysmal French, I deciphered that there was a “problem” (said with thick French-Tunisian accent). “Ah” I replied. He was not a happy man. There was an issue with my passport, or license, or even the car. Who knows?! Whatever he was doing, I can only assume he wanted some sort of bribe, and I wasn’t about to concede; however, he now had my car keys in his hands and was refusing to give them back....

I stepped out of the car and he gestured at me to empty the vehicle - so I began laying my bags on the side of the road as he stared at my passport and license. He asked me to open each bag to have a wee look-see and when he eventually arrived at my bagpipes he paused and looked at me. “Mezoued?” He said with slight curiosity. At this point I should mention that I know about seven words in Arabic; one of them is ‘mezoued’ which means ‘bagpipes’ in Tunisian, and another is ‘Yalla’ meaning ‘come on’ or ‘let’s hear it’.

He looked at me again, and I stared back and nodded. “Yalla” he said, without a smile. And I thought ‘Righty-ho, I will then!’ So I assembled the pipes in front of him quickly. “Yalla” he said again! The drones kicked in, and as I began to pipe out a squeaky rendition of ‘Cock of the North,’ his grimace melted away and was replaced by the biggest grin I’ve ever seen on a Tunisian policeman’s face. “YALLA” he shouted as he started to stomp and spin on the spot! “YALLA” he beckoned to the other policemen sitting in their car not too far away.

Moments later I was back on the highway with a massive grin on my face speeding towards Mahdia. Any previous doubts I'd had about embarking on this trip were totally thrown out the window, and I knew the next few years were going to be an extraordinary adventure.

At this point you might be wondering why would anyone take the bagpipes to Tunisia and what on earth does this have to do with Kinloch Anderson? Well, to introduce myself, my name is Ross O’Connell Jennings and it is my life aim to play the bagpipes in every country of the world. To date, I’ve piped in 60 countries and I'm proud to say that I've worn my Kinloch Anderson kilt in every single one. If you’re intrigued as to why the Tunisian policeman was so fond of the pipes (as I was), you may be interested to know that the national instrument of Tunisia is also the bagpipes; however, it has a closer resemblance to an upturned and inflated dead goat - one of the many surprising facts I’ve learnt throughout my travels!

Highland dress, bagpipes and camera kit don’t make the lightest of luggage, so early on in my travels I decided to cut down on my clothing and ditch the jackets. ‘Day’, ‘Evening’ and ‘Argyll’ kilt jackets make for a great look; however, they’re pretty hefty when you’re hiking up a mountain! Now, whenever I pipe and take photos, I wear a slightly unconventional combination of clothing - dress sporran, green socks, brown suede brogues, white collared shirt and a Baird Ancient tartan kilt - as you will see in a few of my photos. I was also lucky enough to have my kilt fitted at Kinloch Anderson in 2009, whilst reading my first year at the University of Edinburgh, and my tartan of choice was as a result of my Scottish mother, who’s extended family make up a large portion of the Baird clan that reside in Dumfries and Galloway.

Since Tunisia, the first country I visited with ‘The First Piper’ project in mind, my travels have taken me across deserts, through jungles and even to the tops of mountains. It’s safe to say that my kilt has been through its fair share of adventures and, at times, has caused a bit of confusion. Last year whilst travelling to Vietnam, I spent four days in the beautiful coastal town of Hoi An. Every day, I put on my kilt in the morning, grabbed my pipes and marched into town to find a new piping spot.  No matter what route I took, I always seemed to bump into the same two fruit vendors, who’d giggle away whilst firing questions at me in Vietnamese. My Vietnamese is pretty non-existent, so I would politely nod-back and smile, which only prompted them to laugh even harder. It wasn’t until my last day, when I got someone to translate, that I realised their main questions were “Are you a woman? And if you are, why are you so ugly?!” Fortunately, the most common questions I’m asked aren’t about about gender (!!), but more to do with why I decided to embark on this journey. In short, I started because I liked the idea of a bagpipe-related world record, but my initial inspiration changed as a result of my trip to Tunisia. Day by day I realised I shouldn’t treat the journey as a box-ticking exercise, but rather a collection of experiences that are best enjoyed slowly. It is a bit of a cliché, but the journey is just as important as the end goal.