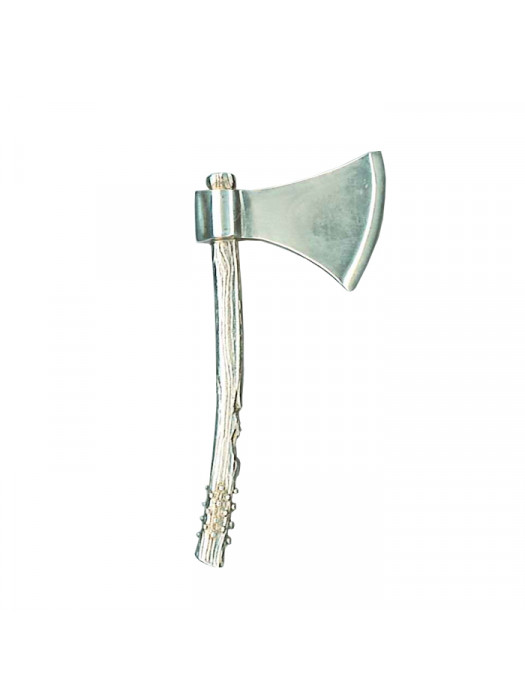 Sterling Silver Kilt Pin With Robert The Bruce's Broken Axe which comes in a Kinloch Anderson presentation box.
It is worn on the front of the kilt normally near the bottom of front apron near fringing and does not get attached to under apron. Prior to the main battle of Bannockburn, Robert the Bruce is identified by Henry de Bohun an English champion Knight. A fully armoured de Bohun lowered his lance and began a charge to kill the King of Scotland. King Robert was mounted on a small horse armed only with a battle axe and wearing no armour. As de Bohun’s great war horse thundered towards him, the King stood his ground, while being watched with mounting anxiety by his own army. With the Englishman only feet away, Bruce turned aside avoiding his lance,, stood up in his stirrups and hit the Knight so hard that he split his helmet and head in two. The shaft of his axe broke such was the force of his downward swing. This pre battle encounter and Bruce’s bravery has become legendary. On returning to his army, he was rebuked by his commanders for the enormous risk he had taken, the King only expressed regret that he had broken the shaft of his axe.

Delivery time for this item is approximately 1 week for within the UK and 2 weeks for outside the UK.