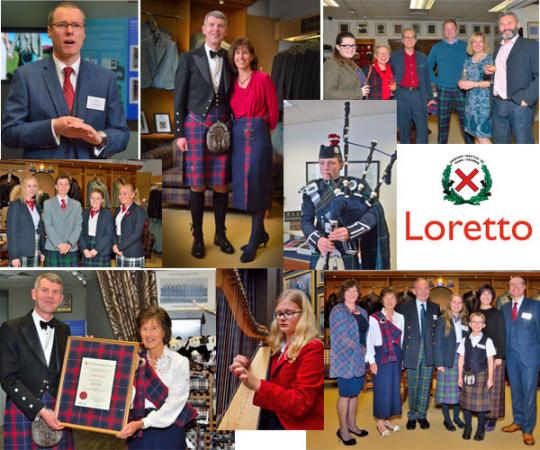 Loretto School is Scotland's oldest boarding school.  Their new Loretto Tartan was the focus of a large gathering held at Kinloch Anderson, in Edinburgh. The launch of the new Loretto tartan was a very special occasion attended by Loretto pupils, parents, OLs and friends of the School. The 21st century tartan, which will be a defining part of the fabric and history of Loretto School, was revealed for the first time at the official launch.

Who better to showcase the plaid than Loretto Headmaster, Dr Graham Hawley, resplendent in a Loretto Tartan kilt for the launch event.

The Loretto tartan can only be worn by those connected with Loretto School – pupils, staff, parents and former pupils if they wish to do so. Orders are placed through Kinloch Anderson.

However, various items of Loretto Tartan merchandise are available to all and they can be viewed here - http://ol.loretto.com/frmPrimesDisplay.aspx?A=__13

The “Loretto School” tartan is based on the Musselburgh Tartan, the district in which the School is located. This has been combined with colours from the MacThomas Tartan which relates to the founder of the School, Rev. Thomas Langhorne. Loretto became known throughout Britain during the formative and brilliant headmastership of Dr Hely Hutchinson Almond (1862-1903). Elements have therefore been taken from the MacDonald Tartan which is associated to the name Hutchinson.

The main colours of the tartan are a true representation of the School including the ‘Loretto Red’ which is a strong element of the School branding as seen in the iconic red jacket worn by the pupils. The navy blue represents one of the School Houses, “Mackintosh”. Green has been added to represent another of the Houses, “Langhorne” and this colour also reflects the fairways of the golf courses in East Lothian which links up with the Loretto Golf Academy. In addition, pink and purple have been added to represent the two other Houses – “Greenlees” and “Tristram”.