The First Piper - No Encore in Cambodia! 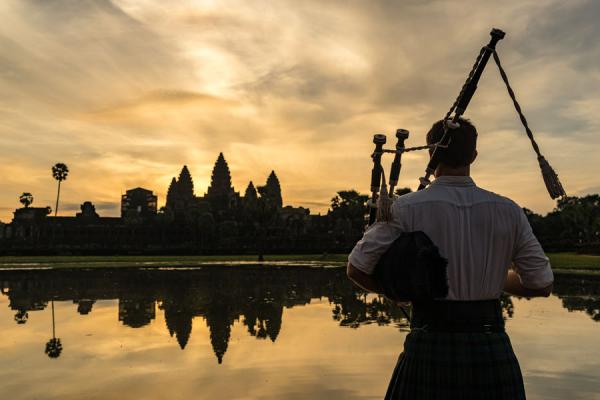 No encores at Angkor!

Whenever I set off for a day of kilted adventures I always have a few locations in mind. Some spots are more suitable than others for piping so I’ve always got to bear that in mind! Well-known landmarks are particularly photo-worthy, but they’re always busy with tourists so I tend to avoid playing pipes when I’m there. On a recent visit to Cambodia, however, my attempts at avoiding the crowds totally failed, and the spectacle ended in a short rendition of Highland Cathedral, a cheering crowd of 4000 tourists and a bunch of not-too-happy guards!

I leapt out of my top bunk and gracefully descended to the dorm room floor of my Siem Reap hostel. It was 4am, still pitch black outside, and nighttime hadn’t made things any cooler or dryer. October is just about Cambodia’s wettest month so you’re either dripping from the humidity or from the rain. Not great when you’re about to put on a 100% wool Kinloch Anderson kilt and play the bagpipes. The reason for my early rise was to get to the Angkor temple complex ticket counter before the crowds, and consequently find myself a decent spot for sunrise at Angkor Wat. My aim was to take that classic photo of Angkor Wat at sunrise, but to also include my kilted silhouette in the foreground holding the pipes.

After kilting up, I grabbed my bagpipe bag and bundled myself into an awaiting tuk-tuk with two other travellers, Hsin and Ricardo. We zipped away towards the temples, and once we’d bought our tickets and had a quick introduction, I convinced them both to help out with my photos for the day. They were a little nervous to begin with, but I assured them there’d be no police encounters and I’d take the blame if there were! ‘Guards definitely don’t count as police,’ I thought to myself as we arrived at the temple entrance.

Striding across the stone walkway in my Baird tartan kilt towards Angkor Wat was a strange feeling. The walkway is easily two hundred metres and enough to work up a mean sweat on a muggy morning. As we approached the guards a wave of apprehension washed over me, but much to my surprise the guards didn’t bat an eyelid, and I realised it’s probably because they’ve seen it all before! Angkor Wat is the most visited monument in South East Asia so they no doubt have their fair share of oddly dressed travellers. I was hoping I’d be the first one in a Baird tartan though!

Arriving at Angkor Wat was certainly dramatic, but any sense of grandiosity was totally shattered when we witnessed the crowd before us. Jaw-dropping to say the least and a stark contrast to what any image portrays. In spite of this, I was very aware that I was visiting in low season so I was grateful for the reduced chaos, and in all honestly, it was to be expected. Angkor Wat is simply incredible. The best advice I had been given was “…come with stiff elbows and a sense of humour and you’ll enjoy it.” Great advice, and valid for most travellers, but on this occasion I felt like Moses parting the Dead Sea!! When I walked up to the crowd in front of the ‘iconic pond’ that sits before the temples, the swarming mass stared in awe and parted to allow me an unobstructed view of the temple. Quite the bizarre experience.

After posing for a few photos, I turned to the sea of cameras behind me and started chatting to the bemused tourists. “Aren’t you going to play?!” I heard from the side, “YOU HAVE TO PLAY!” an Indian man exclaimed from behind me. Although my original intention wasn’t to pipe, on this occasion I felt the dramatic welcome was a slight invitation and so too were the numerous exclamations. ‘I suppose I now have to’ I thought to myself, ‘I’m definitely not getting out of this!’ So with a crowd of about 4000 people around me, I punched in the drones and serenaded the temples and tourists alike, with a brief rendition of Highland Cathedral. The clouds parted and the beams of early morning light stuck the temples to produce one of the most fabulous settings I’ve ever been able to pipe at. My moment of euphoria was only amplified by the cheers at the end but it was promptly shattered by an awaiting guard who tapped me on the back, and shouted “PLEASE DON’T DO THAT!” The crowd started to disperse as I apologised profusely to the stern guard before me. I was anticipating a prompt Angkor eviction, but he simply took out his phone and snapped a few pictures before storming off. ‘I should’ve given him my blog details’ I thought to myself. Little did I realise he was about to send the photos to every guard in the Temple complex to make sure I couldn’t pipe again! I was then assigned a ‘minder’ who proceeded to followed me around for the rest of the day!

In spite of my telling off, I was eager to visit as many of the temples as possible whilst wearing my kilt. I managed a fair few, but by the time I'd visited my second temple (Bayon Temple), every guard in the Angkor Thom complex had been told to watch out for the man in a skirt! I was allowed one and only one photo per temple and I was absolutely NOT allowed to pipes again.  The guards might have been slightly stand offish, but everyone else I bumped into couldn’t have been more welcoming. The friendliest groups always seemed to be the trainee monks who were ecstatic at the sight of the kilt and couldn’t have been more eager for photos!

A bucket-list-piping experience indeed, and a one that I’ll hold in high regard for many years to come. The one thing I will always take away with me is the fact that there are absolutely no encores when you play the bagpipes at Angkor Wat.

See all the countries Ross has visited at thefirstpiper.com